Nuclear Power Is Not The Answer

As we grasp at straws trying to find a way to substantively address climate change, some folks on the left who really ought to know better are touting the use of nuclear power as an alternative to coal, usually prefaced with, “I hate to say this but…”.

Nuclear power is neither safe nor cheap and solving climate change by killing ourselves off another way is just plain stupid. Aside from cost, there are 2 BIG problems with nuclear power:

1.  It has this ugly tendency to leak and explode and expose land and people to toxic radiation.

2.  There is no known safe way to reliably contain it or dispose of its toxic bi-products.

(F)inancial and energy journals make clear that boiling water with uranium is the costliest and dirtiest energy choice. Even Time magazine reported Dec. 31, 2008, “It turns out that new (reactors) would be not just extremely expensive but spectacularly expensive.”

Florida Power and Light’s recent estimate for a 2-reactor system is a shocking $12 to $18 billion. The Wall St. Journal reported on nuclear’s prospects May 12, 2008 finding, “[T]he projected cost is causing some sticker shock … double to quadruple earlier rough estimates. These estimates never include the costs of moving and managing radioactive waste — a bill that keeps coming for centuries.

Radioactive tritium has poisoned groundwater near at least 14 U.S. reactors, including Kewaunee in Wisconsin. Water under Braidwood, Dresden, Brookhaven, Palo Verde, Indian Point, Diablo Canyon, San Onofre and Kewaunee is all contaminated at levels above EPA and NRC standards.

Nuclear power is so clean that Germany legislated a phase-out of its 17 reactors by 2025. Germany’s 1998 decision was based partly on government studies that found high rates of childhood leukemia in areas near its reactors.

This article is personal to me because one of the very first protests I ever attended back in the early 1970’s was to stop construction of the Palo Verde Nuclear Power Plant outside Phoenix, AZ. 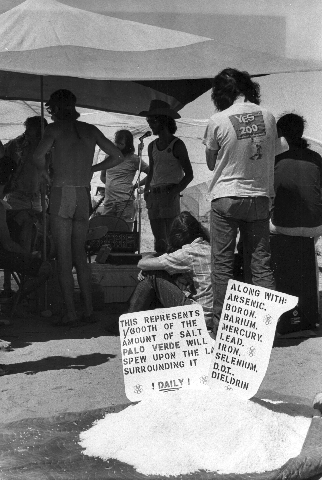 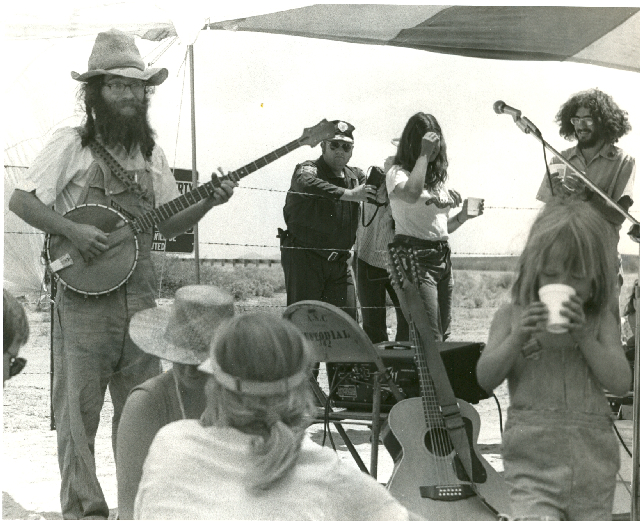 We were a scruffy lot, gathered just outside the barbed wire fence that was the future Palo Verde site with law enforcement on the other side waiting to see if we would go through the fence. Both photos taken by yours truly.

We were right to be concerned then, and those concerns are still valid today. This is not a viable way to provide energy. It is toxic, it is expensive and while there is still the possibility of constructively addressing climate change, once the monster of nuclear pollution is unleashed, we will have committed planetary suicide.