Well I didn’t make it to the Rally for Sanity and/or Fear today but my son did and saw this wonderful sign.  I am reminded of another sign that we had in our front yard at the beginning of the Iraq war that said “Peace is Patriotic”.  It greatly incensed our neighbors, who took it down and then surrounded our front door with signs that said, “I stand with President Bush”. I guess we’ve evolved a tad: 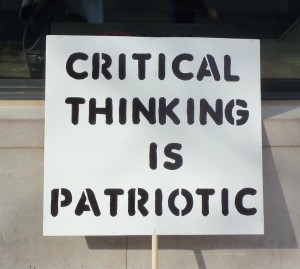 I posted my thoughts about the rally on the FPN site here.

October 30, 2010 / Lucinda / Comments Off on Elect Or Genuflect? The Choices Going Forward

There is a whole lot to dislike about the electoral process in the United States.  The low point for me is usually

the few days before the election when the pundits start telling us who will win.  Last night on Twitter, The Nation’s Greg Mitchell declared Feingold’s race in Wisconsin a loss.  Sort of like someone telling you how a movie ends before you’ve seen it, only in this case we are active players in the drama that has very real consequences, It would be nice if the pollsters and the media at least had the polites to let us vote before telling us who we voted for.

But that is probably a bit of old-fashioned genteelness on my part. There has been little discussion this election cycle on the veracity of electronic voting results even it has been proven over and over again that those results can easily be tampered with. Are we really voting when we vote on Tuesday?  Hard to say.  And courtesy of SCOTUS, with a lineup that is a result of said tamper friendly machines and the stolen election of 2000 allowing the former monkey in chief to name some very bad choices to the Court, our elections can now be easily bought and sold by corporations that spend unfathomable amounts of money that comes from who knows where on candidates that tell us our $20 contributions are important because they represent the people.

Back in 2007, I wrote a column for the Louisville Eccentric Observer called Voting Your Bliss that looked at the primary process that was in full swing in the runup to the 2008 election.  In it, I included a quote from the ever observant Wendell Berry,

This is a crisis of our democratic system—to give the people a vote but not a choice is a procedure common to modern dictatorships—but it is a crisis that has been officially unnoticed for a long time.

In this election it is very clear that we have a crisis. We are once again faced with some very bad choices, often between total nut cases and candidates who spend an enormous time trying to walk a center line tightrope and fit into the system rather than acting on their true beliefs or ours.  In Voting Your Bliss I wrote about the need for independent, thinking candidates and the need to reinsert real, meaningful dialog into our elections,

As voters we need to demand choices that meet our needs rather than accept candidates who have sold their souls to the highest bidder…The party faithful will smile indulgently and remind us not to throw away our votes on these fringe candidates.  But supporting these candidacies is not a question of throwing away our vote and it is precisely what we need to do because they give us something to vote “for” and  a chance to reclaim our democracy.

We need to insist that the pressing issues confronting this country be addressed and that our candidates not be beholden to those whose agenda is the destruction of the planet and its people.  It’s time to vote our bliss and not our angst.

During this election cycle, I have had several friends who have taken on one of the responsibilities of being citizens in this country and have run for office.  They have done so even though the likelihood of getting elected has been small.  I know these people and that they are  highly principled thinking folk  who we would do well to elect.  The result of that being that I’ve given more money to candidates this election cycle than I ever have before, and mostly to candidates who stand little chance of winning.  Why do that when I don’t expect that they can win?  For the simple reason that we need to reframe the body politic so that the right people can win, so that voices who say what needs to be said are heard, not thrown out of two-party debates or marginalized because they don’t have a corporate pac or media cronies behind them.

In a column written later in the 2008 election cycle, I added this thought,

Until we gain the political will to demand that our votes count and that all candidates are given a fair chance, our electoral process will continue to be a sham rather than the exercise of democracy by we the people that it was meant to be.

There is a substantial chance that the results of this election will wreak significant harm on our enfranchisement.  At this point, aside from making the best possible choices we can in a lousy horse race on Tuesday, it is time to quit accepting the system as the way it needs to be.  It isn’t working and with each election cycle, it is getting worse and worse. Going forward we  need to quit playing the game and drinking the koolaid and insist on an electoral process that finally represents the people.

Barack Obama told us that we are the ones we’ve been waiting for.  Perhaps we’d better quit waiting.

Postscript:  Just after posting this I came across Saturday Night Live’s parody of The Rent Is Too Damn High Party, hilariously close to the truth, watch, enjoy, think.