The Real Failure And What We Choose To Do About It

I went to see Where The Wild Things Are over the weekend, highly recommended although the beginning of the film ironically adds scenes that the film’s producers apparently imagined Sendak must have been thinking were the catalyst for this flight of fancy instead of Sendak’s quite plausible story line because it could not possibly be a commercial success I suppose unless you add some big bad mean teenage sister and her evil friends and a single struggling Mom who just needs affection herself.  Which unfortunately takes an elegant tale and makes it both problematic and unsuitable for younger children, for whom the book was written in the first place.

Okay, so maybe that is a rather qualified recommendation. Even so, I still greatly enjoyed the film.  But after coming home and re-reading the book, I started thinking about the point that regardless of where our flights of fancy lead us, sooner or later we need to come back to reality.  Which of late here on Planet Earth pretty much sucks.

The following morning as I was reading through the Sunday newspaper, I realized that the pile  of newsprint that was devoted to trying to sell me something I probably don’t need was far larger than the part devoted to informing me of the publisher’s take on what is so.  As an example, there were any number of ads hawking beverages in plastic bottles, but nowhere a reference to a recent report that,

Drinking water from plastic bottles made with the toxic chemical bisphenol A (BPA) increases urinary levels of the chemical by nearly 70 percent, according to a study conducted by researchers from Harvard University and the Centers for Disease Control and Prevention.

BPA, an industrial chemical that makes plastics hard and transparent, is widely used in plastic drinking bottles, infant bottles and other consumer products, and also in resins that line cans of food and infant formula. The chemical has been shown to disrupt the hormonal system, potentially leading to reproductive defects as well as brain damage, cardiovascular disease, cancer, obesity and diabetes.

Nor among all the glossy pictures do we see this:

On a daily basis, we are bombarded with a veritable avalanche of data that skewers our perceptions of what is real and what is important.  Not only that, but the historic context in which we process this bombardment is skewered as well, something that is made elegantly clear in the reading of From Eve to Dawn, Marilyn French’s history of women, or Riane Eisler’s The Chalice and The Blade, or other documentations of women’s lives and history that has been marginalized in the telling of our stories over the years (and ditto that point regarding the history of anything that isn’t pale and male).  As Corinne Kumar makes clear in this elegant speech, to truly attain social justice, we need to understand the roots and depth of the human condition, and that has been rather literally bleached out of history.

Which brings me to this–While the U.S. is operating, or more to the point not, on the assumption that our national decision-making must be  predicated on  the theory that mega banks and insurance companies are too big to fail, that corporate welfare must be preserved even at the cost of human welfare becoming a toxic asset, Richard Power points to the real show-stopping questions of whether the climate and human race are too big to fail, saying quite pointedly that if we don’t get a grip on climate change,

Goldman-Sachs and its ilk won’t be our biggest problem, or even among our top ten problems. 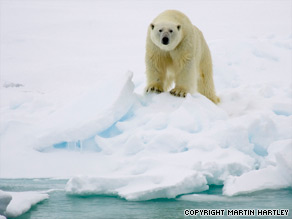 No longer too big to fail...Summer ice in the arctic will likely be gone in 20 years. But consider the amount of news coverage this story has gotten compared to the boy who didn't go up in the balloon.

the beginning of Kubrick’s 2001: A Space Odyssey, i.e., just a bunch of armed apes. Indeed, it is not just the future that we are in danger of losing but also the past.

As for the human race,

But as Power eloquently documents, that point seems to be completely forgotten when it comes to things like our policies on issues such as Darfur or empowering women. Here in the U.S. we have been having an obsessively myopic national angst attack regarding the financial and health industries and our national ‘security’ at the expense of almost everything else–the environment, education, etc.

If indeed we continue to insist on measuring success by corporate wealth and how much stuff we make and buy, Goldman Sachs will continue to thrive.  For awhile.  But in the end, human beings and the climate will, inevitably, fail.

Does it have to be that way?  Honestly, I no longer feel any certainty that we can stop it from happening, we may well be beyond the tipping point.   But one thing is for damned sure, we don’t have to continue to contribute to our own demise.  There are many efforts being made to change our values paradigm to reflect the world that is really so. One very exciting new initiative is The Real Wealth of America Public Policy Project, based on Riane Eisler’s, “The Real Wealth of Nations” which,

is designed to advance the real wealth of our nation: the health, well-being, and full development of our nation’s women,  men, and children. A major aim of the project is to change the present economic  perspective to one that not only recognizes the enormous “back-end” financial costs of  failing to invest in people, but also recognizes the direct economic benefits of investing in
human capacity building.

As Eisler states: “Rather than trying to just patch up a system that is not sustainable, let’s use our economic crisis to move to an economic system that really meets human needs. As Einstein said, we can’t solve problems with the same thinking that created them. In our time of rapidly changing technological and social conditions, we must go deeper, to matters that conventional economic analyses and theories have ignored. We need a caring economics that no longer devalues the most important work: the work of caring for people, starting in early childhood, and the work of caring for our Mother Earth.”

The indicators for the currently used Gross National Product were developed and adopted  during the depths of the Great Depression. They were only meant by their authors to be a beginning for measurements, not the be all and end all.

We urgently need new economic indicators. The RWA public policy project is a strategic step toward achieving this goal.

The governing values for measuring and promoting the Real Wealth of Nations are:

It is precisely this kind of thinking that is absolutely critical if we are to make the paradigm shift necessary to avoid presiding over the biggest failure of all, our own and that of Mother Earth.  I have a recording of Phil Och’s song “I Ain’t Marching Anymore” where he introduces the song as a “turning away song”.  Turning away is a very powerful statement and we  need to do a lot more turning away, from greed, from exploitation, from violence and hate.

We need to say no more, but we need to go beyond that–we need a change of direction such as Eisler is suggesting.  We need to do this on a personal level and on a societal level.  On October 24th, there will be a Global Day of Climate Action with events all over the world.  Find out what is going on where you live and make plans to be there, support The Real Wealth of America Public Policy Project, find  and support other projects that are path-changers. As Alice Walker so beautifully observes, we are the ones that we have been waiting for.