My first car was a Buick, a hand-me-down from my father who wanted me to have a safe car.  It came with Firestone 500 tires, but that’s another story.  When the Buick finally died, as an act of rebellion, I bought a Toyota.  Since then, I’ve owned 4 of them.  4 cars in 30 years.  I was a good driver and they were, for the most part good cars.  Until last August when I traded in my 10 year old van,  who went by the name of Van Gogh, for a Camry.  I’d been planning to buy a smaller, more efficient car, but the very nice shocks and lumbar support spoke to my middle-aged body (that’s defined as I could get in and out of it without pain).  And the mileage was much better than the van, which sadly had gotten an official 19 mph, meaning it wasn’t a Clunker so no rebate like those folks who traded in for more efficient trucks that got 18 mph.

By the time I had owned it for 2 days, I knew that despite months of test-driving various cars, I’d made a bad choice.  For one thing, there was no logical place to put my purse, something I’m guessing male designers weren’t too worried about.  Second, the rear vision is lousy. And you have to do some weird body contortions to plug your pod into the USB port.

But its those new-fangled electronic keys that are not actually keys that leave me just gob-smacked.  You start the car by pushing a button that works if the key is in radio range.  Okay, kinda cool but…if the battery in the gizmo dies, it’s a problem although there is a workaround, explained in detail in the manual that I completely did not understand. 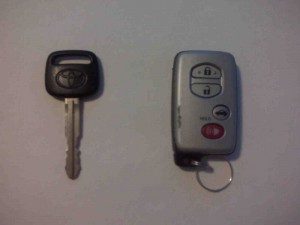 And what if you lose your keys?  No problem, Toyota will make you a new one.  But it will cost a couple hundred dollars.  This is supposedly an advancement on the old-fashioned kind of key that cost about $3 to replace and could be gotten at the hardware store and did not require batteries.  But wait, it gets better.

The very best thing about the key that isn’t a key (in fact just to avoid any confusion, Toyota refers to it as a “smart key system”) is that it takes more than 20 pages in the manual to explain how to use it as well as a whole other section on what to do if the key fails.  My particular favorite paragraph reads,

When riding in an aircraft:

When bringing a key with a wireless remote control function onto an aircraft, make sure you do not press any buttons on the key while inside the aircraft cabin.  If you are carrying the key in your bag, etc. ensure that the buttons are not likely to be pressed  accidentally.  Pressing a button may cause the  key to emit radio waves that could interfere with the operation of the aircraft.

Of course Toyota could have maybe provided a locking mechanism, but no dice.  The best part is that instead of posting this warning in huge letters on the front of the manual, it is buried on page 25.

Which brings us to the small matter of the floor mats that might catch on accelerator pedals that might not quit accelerating.  And you know it is major doodoo when they quit making the cars and haven’t issued a fix.  But they have lots of helpful advice about what to do if the problem occurs (press down firmly on the brakes and presumably kiss your ass goodbye).

So cars were invented what, about a hundred years ago?  Forgive me the presumption, but if I’m paying tens of thousands of dollars for one of these (and that after hours of dickering, and I do not use that word lightly, with the sales dude, I’m taking the leap of faith that the car manufacturer will provide me a product that:

Hello Toyota, your customers deserve better than being told to just keep driving your new-fangled death mobiles.  How about you give us our money back?  Offer us free service for life if indeed this is fixable?  In the meantime, and I can just imagine my father trying not to smirk, might be time to go check out those Buicks.

I’ll leave you with Neil Young’s ode to his first car: