Is The Gulf Oil Disaster Compromising Our Reproductive Health?

June 12, 2010 / Lucinda / Comments Off on Is The Gulf Oil Disaster Compromising Our Reproductive Health?

Last week, in an article published by Truthout, I examined the potential for human reproductive 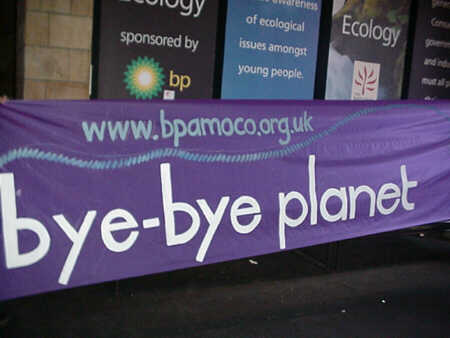 harm as a result of the Gulf oil disaster.  It was not until this week however that the EPA finally released information regarding what chemicals are in the dispersants, a crucial first step in definitively assessing harm.  The manufacturer,  Nalco, had claimed that some of the ingredients were trade secrets. But they were happy to explain in general terms on their website what was in the dispersants,

Really?  We drink this stuff and put it on our babies? Must be harmless, right?  So why not just tell us the exact ingredients??

Finally however, the public and planetary right to know has  triumphed over greed. Two different versions of Corexit have been used.  The New York Times provides this description of the two products:

“Corexit 9527, used in lesser quantities during the earlier days of the spill response, is designated a chronic and acute health hazard by EPA. The 9527 formula contains 2-butoxyethanol, pinpointed as the cause of lingering health problems experienced by cleanup workers after the 1989 Exxon Valdez oil spill, and propylene glycol, a commonly used solvent.”

“Corexit 9500, described by Pajor as the “sole product” Nalco has manufactured for the Gulf since late April, contains propylene glycol and light petroleum distillates, a type of chemical refined from crude oil. Nalco had previously declined to identify the third hazardous substance in the 9500 formula, but EPA’s website reveals it to be dioctyl sodium sulfosuccinate, a detergent and common ingredient in laxatives.”

Memo to self:  avoid laxatives at all costs.  But seriously, what the heck are those chemicals and what can they do? Tom Philpott has written the most thorough description that I’ve seen thus far:

“We finally know the main two dispersants that BP and the U.S. government are using to treat the ongoing Gulf spill. Both, by their maker’s own admission, have the “potential to bioconcentrate,” and both have “moderate toxicity to early life stages of fish, crustaceans, and mollusks,” according to a study by Exxon, the company that originally developed them. Their use may be the least-bad course, given the importance of minimizing oil’s effect on coastal wetlands. But a little digging into the chemical makeup of these two substances, which are being dumped in vast quantities into the Gulf, reveals that they could potentially do far more harm than good, both to the Gulf and to humans who later eat from it…

…substances that bioconcentrate tend to move from water into fish, where they can do damage to the fish itself, as well as be passed on to predator fish – and on up the food chain, to human eaters…

…And just how toxic is this stuff? The data sheets for both products contain this shocker: “No toxicity studies have been conducted on this product” – meaning testing their safety for humans”…

…According to their data sheets, both 9500 and 9527 are composed of three potentially hazardous substances. They share two in common, organic sulfonic acid salt and propylene glycol. In addition to those two, Corexit 9500 contains something called “Distillates, petroleum, hydrotreated light,” while Corexit 9527 contains 2-Butoxyethanol…

…Petroleum distillates and 2-Butoxyethanol are both solvents; neither are substances you’d excitedly dump into a vibrant ecosytem. According to its International Chemical Scorecard, 2-Butoxyethanol “may be absorbed” by the skin; causes “cough, dizziness, drowsiness, headache, nausea, and weakness” when inhaled; and “abdominal pain, diarrhea, nausea, and vomiting” when ingested. For petroleum distillates, the International Chemical Scorecard has similar indications about exposure for humans, and adds this unsettling line: “The substance is harmful to aquatic organisms.””

So we know that the dispersants contain toxic substances.  It would seem that at the very least, since we’ve already dumped hundreds of thousands of gallons of them into the Gulf, that we–meaning presumably a governmental agency tasked with doing such things–should be rigorously monitoring their impact.  Don’t hold your breath, or rather, it might be a good idea if you do.  NRDC’s Gina Solomon reports that,

“New BP air testing results were posted.. from April 27 – May 26 for benzene, total hydrocarbons, and 2-Butoxyethanol. There’s still no information about other oil-related air toxic chemicals such as naphthalene or hydrogen sulfide, offshore.

The BP sampling plan focuses only on workers on the large ships, and appears to not include monitoring for the people on the approximately 1,500 small fishing boats helping to clean up the spill. These people are dismissed as of “Reduced Priority” on page 4 of the BP sampling plan.

Nearly 70% (275 out of 399) of offshore air samples had detectable levels of hydrocarbons and nearly 1 in 5 (73 out of 399) had levels greater than 10 parts per million (ppm), which is an EPA cutoff level for further investigation.

6 samples exceed 100 ppm which in a previous monitoring summary was labeled as the action limit.  This label appears to have been removed in the most recent summary document. No information is given on where these samples, or the 4 found to be between 50 and 100 ppm, were taken.

20 (5%) samples had detectable levels of benzene with measurements up to 0.5 ppm. The National Institute of Occupational Safety and Health (NIOSH) Recommended Exposure Limit (REL) is 0.1 ppm.

In other words, it would appear that people working near these chemicals are being at least in some cases exposed to levels that are unacceptable.  And those are the priority people, we don’t know about the reduced priority people. (Never mind all those chemicals,  let’s just start by forbidding our data collectors from ever referring to anyone as a reduced priority person. And hello?  Why is BP monitoring this, that has about as much integrity as putting an embezzler in charge of a bank fraud investigation.)

Also according to Solomon,

“The immediate worry is what are called volatile organic compounds, which include chemicals like benzene that can be released in a vapor phase from the oil that’s floating in the water,” Solomon said. “These chemicals can cause acute health effects such as headache, nausea, vomiting, cough, dizziness. The chemicals can also cause longer-term effects, including the potential for miscarriage or low birth weight in pregnant women and risk of cancer over the longer term.”

“So far,” Solomon added, “the levels of these chemicals have been fairly low along the shore lines, so the main concern is for the emergency response workers. But we’re worried that as the oil gets closer to shore the levels of the chemicals in the air will rise.”

So what does all of this mean?  Good question.  We know that several of the ingredients in these products are harmful.  To what extent, we simply don’t know because:

A.  They have not been adequately tested for toxicity prior to use.

B.  No one has ever taken a wholesale toxic chemical dump in a large body of water on this grand a scale before.

C.  There is a concern that by breaking the oil up, the dispersants are making the oil itself, also toxic, harder to clean up.

D.  As Solomon notes, the data that we are getting via BP is problematic, making quantifying the damage all the more difficult.

I don’t want to re-hash all the points I made in the Truthout article, but suffice to say, this additional information only confirms my concerns.  We know that aquatic life is dying, that wetlands are being grievously harmed, and that people are suffering from a variety of health symptoms.  What we don’t know and won’t for quite some time is what the reproductive consequences may be.  In the meantime, it is urgent that data be properly collected and made available and that every precaution be made to protect the most vulnerable among us, particularly pregnant women and children.

Addenda: Two additional points that add to the urgency of addressing this issue, via the San Francisco Chronicle:

“In a report written by Anita George-Ares and James R. Clark for Exxon Biomedical Sciences, Inc. titled “Acute Aquatic Toxicity of Three Corexit Products: An Overview” Corexit 9500 was found to be one of the most toxic dispersal agents ever developed.

According to the Clark and George-Ares report, Corexit mixed with the higher gulf coast water temperatures becomes even more toxic.”

And even more worrisome:

“It seems like damage brought by the oil gusher has spread way beyond the ocean, coastal areas and beaches. Collateral damage now appears to include agricultural damage way inland Mississippi.

A mysterious “disease” has caused widespread damage to plants from weeds to farmed organic and conventionally grown crops. There is very strong suspicion that ocean winds have blown Corexit aerosol plumes or droplets and that dispersants have caused the unexplained widespread damage or “disease”.

There is no other explanation for the crop damage. Everything points to something that has a widespread effect on plants and crops. While no one precisely knows, all the signs point to BP’s use of aerosolized Corexit brought inland by the ocean winds or rain.

Remember acid rain? Now it seems we could have toxic dispersant rain.”

In the Truthout article, I mentioned acid rain as a reason to be concerned that the toxicity of the oil and the dispersants could move inland.  At the time, quite honestly I wanted the ramifications of that happening to remain a hypothetical nightmare.  It would appear that this may be exactly what is happening, and the implications for our food and water supplies, our health and our lives are very, very bad.