We Are A Self-Terrorizing Nation

November 18, 2010 / Lucinda / Comments Off on We Are A Self-Terrorizing Nation

will make us safe, it occurs to me that we have become a self-sustaining terrorized state.  We don’t actually need terrorists to attack us, we just terrorize ourselves.

Not only that but our military is out to get us too.  A few weeks ago I pointed to the good folks down at Ft. Knox who ran exercises that caused fires that were so bad that a half hour down the road, the entire city of Louisville had an air pollution alert.  And now down in Tennessee, a plant that produces nuclear fuel and processes uranium for the Navy is polluting the bejeepers out of the Nolichucky River.

I have heard people say well that is just the way it is today.  But you know what, where is that written?  Why are these damaging absurdities acceptable?  We live in a country with shocking numbers of unemployed, homeless, hungry people without health care, we pollute our water and foul our air, send our children to fight in wars that are causing a lot more problems than they are solving, allow corporations to be people who disenfranchise real people and then just accept that getting groped at the airport will make us safe.  From whom?

We have met the enemy and he is us.

November 14, 2010 / Lucinda / Comments Off on Don’t Get Cooked For Thanksgiving–Opting Out Of The New Airport Scanners

Unfortunately for those of us flying the formerly friendly skies to get to Grandma’s for Thanksgiving, the turkey may not be the only thing that is getting cooked this year thanks to the new body scanners now in place in many airports.

The TSA originally said that these machines would be used only for secondary screening, for those passengers that set off an alarm at the walk-through metal detector or Explosives Trace Detection (ETD) machine. They are now being used as primary screening at 45 airports, to take nude images of passengers who have done nothing more suspicious than present a boarding pass.

And while the privacy issue is a major concern, what ought to be scaring us a lot more is that these machines are x-raying us.  And there is absolutely no such thing as a safe dose of radiation, which is a long proven cause of cancer, because radioactive load in our bodies is cumulative and every dose, no matter how small adds to that and can lead to cancer,

Backscatter X-ray uses ionizing radation, a known cumulative health hazard, to produce images of passengers bodies. Children, prengant women, the elderly, and those with defective DNA repair mechanisms are considered to be especially susceptible to the type of DNA damage caused by ionizing radiation. Also at high risk are those who have had, or currently have, skin cancer. Ionizing radiation’s effects are cumulative, meaning that each time you are exposed you are adding to your risk of developing cancer. Since the dosage of radiation from the backscatter X-ray machines is absorbed almsot entirely by the skin and tissue directly under the skin, averaging the dose over the whole body gives an inaccurate picture of the actual harm…

…Another type of device uses millimeter wave technology, which if improperly calibrated can cause burns. Less is known about the potential health risks of the millimeter wave devices than those of backscatter X-ray, and as with the backscatter devices, no independent testing has been conducted.

While you can opt out, be aware that TSA is now using,

an “enhanced pat down” in many instances. These pat downs are much more rigorous and often include the TSA using their palms to touch your genitals in a manner that could feel like sexual assault.

But isn’t national safety more important?  Consider this: a group of scientists have raised significant concerns including that the additional risk of additional radiation is about the same as the risk of dying in a terrorist attack and that the amount of radiation that these machines give off may actually be much higher than is being reported.  In addition, the Allied Pilots Association is recommending that their pilots opt out and demand to be patted down instead.

And let’s  bear in mind that public safety is only trotted out when it is convenient in this country.  the EPA allows who knows how much pollution to be legally dumped in our air and water and on our land, the military regularly pollutes wherever they want with no real regard for public safety, we allowed BP to dump shocking amounts of dispersant in the Gulf of Mexico with no regard for our food chain, our roads are a dangerous disgrace, and on and on.

Also it helps to know who has been cheerleading these machines.  Does the name Michael Chertoff ring a bell? And funny thing, these babies are quite lucrative,

Today, 40 body scanners are in use at 19 U.S. airports. The number is expected to skyrocket at least in part because of the Christmas Day incident. The Transportation Security Administration this week said it will order 300 more machines.

In the summer, TSA purchased 150 machines from Rapiscan with $25 million in American Recovery and Reinvestment Act funds.

Mother Jones has a lot more background on who is hawking these machines here.

Which brings us to this–Wednesday November 24th is National Opt-Out Day.  If you are traveling on that day, if faced with these scanners, opt out and go through the pat-down.  We need to say no to these machines that are both dangerous and an assault on our privacy.  If enough people do it, it will lead to a massive slow down on the busiest travel day of the year and that will send a message that is hard to ignore.

Honestly, if I have to opt out of the scanners, and go through a pat-down, if anyone gropes my personal parts in that manner, I cannot swear that I will not haul out and punch them, and I suspect most people will feel grossly violated by this procedure. But these scanners are dangerous and not an appreciable contribution to public safety. Perhaps as an alternative, we could all just travel naked and they’d have to arrest us all for public nudity…

If you’re not already outraged, watch this, you will be–since when are three year old kids who just had their teddy bears taken away considered terror risks?  And then read this.

All I Need Is The Air That I Breathe…

It is been an extremely dry fall here where I live in Kentucky and as a result the fire danger is way up.  But that hasn’t stopped the military from conducting fire-causing exercises at nearby Fort Knox.

Training at Fort Knox this fall has caused the most fire on the post in nearly 25 years, including the burns that blanketed Louisville with smoke two weekends ago.

According to the Ft. Knox commander,

(M)ilitary exercises that involve everything from tanks to rifles can’t stop just because of drought that has produced tinder-dry conditions. Troops need to be trained, including 3,500 that will soon be deployed to the war in Afghanistan, he said.“You don’t want us to stop training,” he said.

Yeah actually we might want you to do that because,

The fires sent fine-particle levels soaring at some Louisville air monitors. The smoke caused the Air Quality Index to reach 183, the highest in at least eight years, said Matt Stull, spokesman for the Louisville Metro Air Pollution Control District.
At that level, the air is considered unhealthy for everyone — not just people who may have asthma or other lung ailments. Residents were advised to limit their outdoor activity.

So there you have it, the U.S. military is defending us by making it impossible for our own citizens to breathe. Makes sense to me.

Election Results We Worry About

November 2, 2010 / Lucinda / Comments Off on Election Results We Worry About

In the it’s going to be a long night and I couldn’t make this up if I tried department, thought this screenshot should be preserved from the Louisville, KY mayoral race, note percentage of precincts reporting: 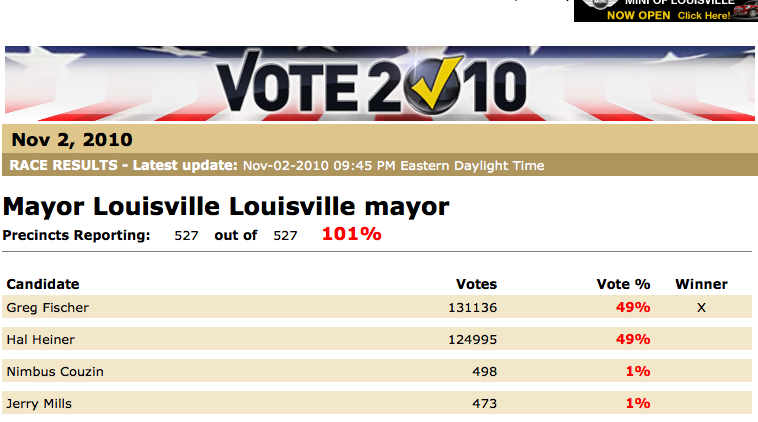 A real, live Sharron Angle flyer, via the Reid campaign.  Aside from the usual objections to the truly disturbing, inaccurate hysteria reflected herein, I wish she wouldn’t even try to use big words like ‘egregious’.