More than 100 people (minimized in several media reports as “dozens”) gathered across the street from health insurer Humana, Inc. in downtown Louisville, KY on Oct. 29th to rally for meaningful health care reform.  After the rally, a smaller group “stormed”  into the lobby to hold a sit-in.  At least that is how one local television station would like you to frame it.  In reality, they walked peacefully through the door, which is exactly what the footage that accompanied the “storming” report shows.

I was at Humana for the rally. It was an honor and a privilege to stand with such dedicated activists who are not afraid to stand up and sit down for what they believe in. When I returned to my desk this afternoon, there was what has become the usual daily avalanche of emails about the health care issue. The Public Option is in. It’s out. Lieberman is in. He’s out. It’s worse than the Hokey Pokey and enough to make you ill. And actually all of this political delay is making us ill. In fact it is killing people every day.

And so today we stood up for health care for all because it it is the right thing to do. It isn’t some crazy liberal wingnut idea. It is a desperately needed change in this country we call a democracy. Full stop. Not only that, but it is 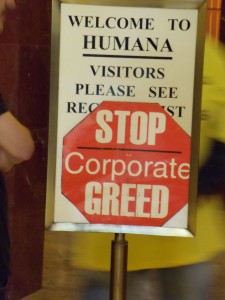 overwhelmingly supported by the American public.

But yet the media persists in coverage such as the above that characterizes those who speak for the common good in such a way as to sound like dangerous people threatening a large corporation whose spokesman is allowed to frame the company’s position as being ‘for’ health care reform. Really? And how much exactly has Humana spent on lobbying against meaningful reform? How many people have been denied coverage for absurd ‘pre-existing conditions?’ How much more do they charge women than men? We don’t learn that on the evening news because Humana is one of Louisville’s star public citizens with a really nice building on Main Street (yes, their headquarters really is on Main Street in downtown Louisville) that makes mega bucks on Wall Street.

And so the viewing public gets a grossly distorted view of the health care debate, and the Congress that Humana and its ilk bought out dither us to death.

This story isn’t over, protesters are spending the night inside the Humana building. We will see what tomorrow brings.

Morning has broken and should have word soon from the Humana sleepover.

Supporters are invited to join us in the morning as we continue the sit-in. We’re inviting everyone to a solidarity celebration for a single-payer nation at the Humana building, 5th & Main, 11:30AM on Friday, October 30th.

In the revolution will be blogged, twittered and sensationalized on television and ignored by the local newspaper department:

If you ran out to get your morning paper in Louisville hoping to read the story, you would have had to do some mighty nuanced reading between the lines because apparently the reporter that the Courier Journal would have sent to cover the story was laid off during one of the recent waves of cutbacks which were accompanied by long-winded Gannett talking head drivel about how it wouldn’t affect the quality of what was left of the paper. In otherwords, the CJ got the memo, they just ignored it and there is nothing, nada, zip in the paper this morning. (Correction–a reporter did show up early yesterday evening and they do have a piece on their website, but nothing in the print edition).

Via The Louisville Courant (oh gasp, a blogger that I’m sure the former CJ publisher would say isn’t a legit news source) has this roundup of coverage thus far:

Will have a wrap-up later today. 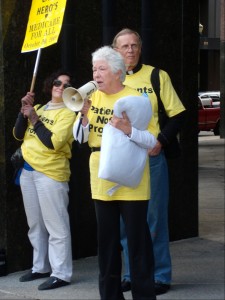 And here it is: The Humana 6, the sheroes and heroes who spent the night at Humana ended the sit-in at 11:30 this morning. The media was MIA.